Theatremania profile on my role in When We Rise! 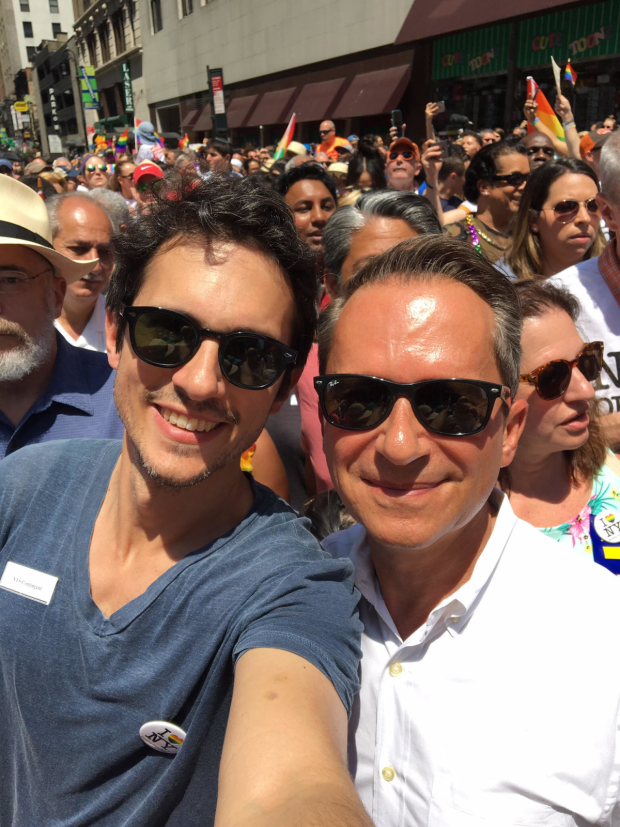 This startling true story is just one of many that straddle the line between personal and political in the Dustin Lance Black miniseries When We Rise, which charts the progress of the gay rights movement from the early ’70s to today. It premieres on ABC on Monday, February 27, at 9pm ET and stars a host of theater favorites including David Hyde Pierce, Emily Skeggs, and Mary-Louise Parker.

Charles Socarides (son of the aforementioned doctor with the same name) plays his own big brother, Richard. Charles Socarides fils has appeared off-Broadway in The Marriage of Bette and Boo and Sons of the Prophet, but this is unquestionably his most personal role. He let us know what he learned from this experience, which was the culmination of a lifetime of character study.

What was it like to play your brother?
It was scary upfront, but I tried to think of it as just a role. When the writing is this good and you’ve got a great role, you just need to do your job.

How did you get the role?
I auditioned. My brother did some work for Hillary, so I actually first met Dustin Lance Black at a Hillary event. He said, “We have this idea that you should play your brother.” I didn’t know how serious he was, but I got a call for an audition. I had to prepare the scene where I come out to my father and I got the part.

The role of your father is played by Tony winner John Rubinstein. You’re sitting across his desk, playing your brother coming out of the closet to your dad. Did filming that scene feel like some kind of psychological exercise?
It was completely surreal. We had this amazing production designer, Bill Groom, who called to ask what my dad’s office looked like. So Richard and I sent pictures. I showed up to film and Lance said, “Hey, do you want to see your dad’s office?” Every day it got a little more detailed. Finally, at 12:30am, we started shooting. Richard was on set. The scene is eerily accurate.

Was Richard’s real-life coming out that dramatic?
Yeah. I would hear about it from my mom. Richard might tell you that the scene in real life was a little messier than written, as life is sometimes. I think the only way he could get through such an encounter was to know there was love between him and dad deep down in his heart and that he needed to say out loud what both of them knew to be true.

That’s something that a lot of LGBT people have to go through and there’s usually an adjustment period between the lie and the truth. Was that the case between Richard and your dad?
It certainly was. There were ebbs and flows. They never really reached a point of ease between the two of them, but it was good for them as human beings to be honest with each other.

There is a scene in the miniseries in which activist Cleve Jones (played by Guy Pearce) confronts Richard and asks if he’s related to “that homophobe shrink who damned my entire generation.” Richard turns around and politely says, “He’s my father; have a good day.” Living in New York and working in the theater, is that a conversation that you’ve had to have?
Whenever I see someone who’s about eighty who comes up to me after a show in New York, I usually know what it’s about. They either went to school with my dad or they were a patient. They’re always very nice. Cleve Jones is the protagonist of this story because he’s a rabble-rouser. Richard works in politics. That scene represents their divergent personalities in a nutshell. Richard’s strength is his ability to remain composed and productive under pressure and not let these personal demons eat at him too much.

Do you have a favorite memory from working on When We Rise?
I’ll never forget the Human Rights Campaign dinner scene. I’m wearing the actual tuxedo Richard wore that night with these hilariously extravagant Greek cufflinks that my dad had given him. But my favorite memory is shooting the scene when Richard visits Cleve Jones at his apartment in Palm Springs. Cleve had a baby with him in that scene. So we’re rehearsing and Guy Pearce has this baby carrier with a doll in it. We go over the scene a few times and then we’re ready to shoot. So someone yells, “Doll baby out.” I thought, ”If we’re taking the doll baby out, what are we putting in?” And along comes this woman cradling two babies. We’re using a real baby. I mean, obviously we are. I realize this is all wide-eyed theater-actor stuff, but I’ll always remember thinking, “Wow, a real baby.”

The article by Zach Stewart: