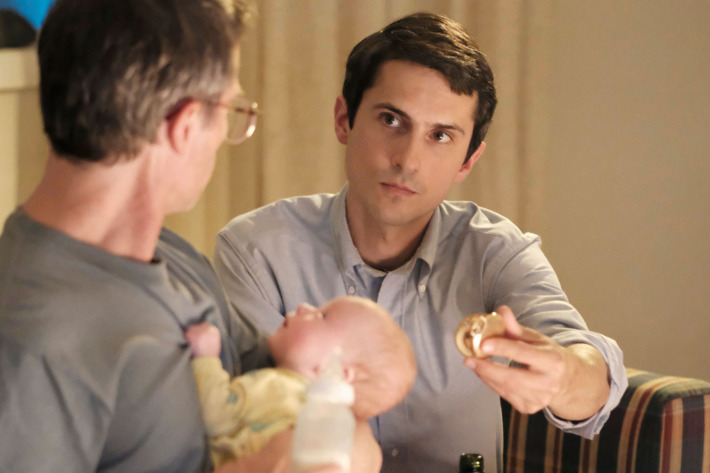 It was around 1 a.m. on a set in Vancouver when Richard Socarides watched his younger brother, Charles Jr., filming one of the most dramatic moments from his private life. Richard was 22, maybe 23, years old, and just out of law school when he came out to their father, Charles Socarides. Their father wasn’t just any father, and he wasn’t just any son: Charles Socarides Sr. was a prominent psychiatrist who championed gay conversion therapy, and Richard would eventually become the LGBT adviser to Bill Clinton. “I had a very close relationship growing up with my dad as a kid, and I knew I was gay, and I knew he was a proponent of this idea,” Richard told me. “[Coming out] was quite traumatic. Even for such a dramatic guy, he had a very dramatic reaction.”

I met with Richard and Charles Socarides Jr. wandering the Mercer Hotel in Soho, looking for a place to sit. Now a former lawyer and policy-maker, Richard, 62, was looking like a casual professional in a jacket and black jeans. Charles, or Charlie as his brother called him, a 30-something actor living in Brooklyn (he demurred when I asked him his exact age), stars as a 40-something Richard (although he looks 28) working in the White House in When We Rise, Dustin Lance Black’s ABC mini-series about the gay-rights struggle. We were chatting before heading over to the offices of GLAAD for a screening of the fifth and six episodes of the series; episode six in particular portrays Richard’s life, and the irony of being a prominent gay man in the White House and the son of one of the most virulently anti-gay psychoanalysts. This was the first time they would sit down together to watch the episode of Charlie playing Richard onscreen.

“It started as a very stunt-casting idea, but he got the part based on talent,” Dustin Lance Black, the Oscar-winning screenwriter of Milk told me at the screening. “It’s a personal story of them and their father that illuminates some of the misconceptions about gay people in such a poetic and personal way. If you’re doing any story about activism, you’ve got to figure out how the political is personal, and their family embodied that.”

Charles Socarides Sr., who died in 2005, was, quite simply, obsessed with homosexuality; it was the focus of his professional career. He wrote a number of books including Homosexuality: A Freedom Too Far, appeared on talk shows, and co-founded the National Association for Research and Therapy of Homosexuality, which specialized in conversion therapy. “Early gay activists realized that in order to win, my father was really standing in their way, because as long as we were viewed as people with a mental illness, we could never get full equality,” Richard explained. “They saw him as public enemy number-one, and I think perhaps rightfully so. He dug in his heels, seeing that as a threat to his professional credentials, as is sometimes the case with people who are narcissistic. I would say our dad had almost Trump-like narcissistic qualities.”

“I see Donald Trump and he sometimes reminds me of my dad,” Richard continued. “I just think he got it in his mind and he felt under attack, and there was no changing his mind.”

I ask the obvious: Was their father gay? “No,” Richard laughed. “There was definitely other psychopathology at work, but not that. He would definitely call himself a ‘ladies’ man.’” Richard had been quite close with their father, moving in with him at the age of 13 after his parents had divorced when he was 6. Even though he had relationships with other teenage boys when he was growing up in New York City, he was able to compartmentalize his romantic life from his father’s work. “As a teenager I was able to totally separate those ideas in a way that protected me emotionally and protected my mental state,” Richard said. “He’s saying these things, but they don’t really apply to me. It wasn’t really until college and law school that it became harder to reconcile those opposite competing ideas, and it was then that I started the process of coming out to people, coming out to myself, and eventually coming out to him.”

For Charlie, “that compartmentalization was one of the harder things to understand about playing Richard,” he said. “The reason it was so difficult to come out to him was because you had such a close history between the two of you.”

Their relationship was never the same after Richard told his father he was gay. “We had some relationship after that — kind of a ‘birthdays, Christmas, and anniversaries’ relationship,” said Richard. “I thought it was important to maintain a relationship, but our relationship never really recovered.”

We made our way to GLAAD, where the brothers did a Facebook Live chat for the organization. It was an intimate gathering, including Black, who stationed himself at the bar for most of the night because he said he was too nervous to watch the series as it aired. Some of the other actors were there too, including Emily Skeggs, who plays activist Roma Guy, and Hedwig director John Cameron Mitchell. The two brothers settled into a couch in the back next to each other to watch the series. A friend of theirs, Keith, would break in and periodically exclaim, That’s amazing! during commercial breaks.

A little over halfway in, the episode honed in on his coming out to his father — albeit many years after it actually occurred, when Richard is working for the White House, you know, for dramatic effect. The scene, which Black wrote after interviewing Richard, features a tense exchange in which Charles Socarides threatens to shoot himself. “I found the experience quite healing,” Richard said afterward. “Only because when I saw it re-created, I realized that it didn’t have the power over me that it did when I was a 22-year-old kid.”

When the scene was over, Richard leaned over to his brother and said, “That was on for a really long time!” They laughed, and after a moment, Charlie whispered into his ear, “You’re such a badass.” Richard smiled, nestled into Charlie’s arms, and they watched the rest of the episode.