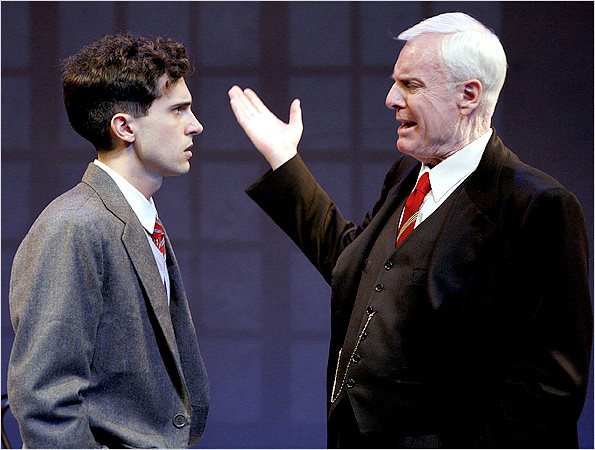 Socarides carries off the demanding lead role with just the right blend of dreamy-eyed naïveté and adolescent feistiness.

Charles Socarides, with an utterly convincing portrait of adolescent turmoil as Eddie…

Eddie, played by Charles Socarides with a bright-eyed slyness that calls to mind an adolescent Steve Carell.

He is totally engaging without being overly solicitous for our affection.

Although Gurney clearly exposes various flaws in his main characters, they all remain likable, thanks in part to the fully realized performances of the cast. Socarides is absolutely charming as Eddie, who frequently breaks the fourth wall to comment on the action to the audience.

Young Eddie (the outstanding Charles Socarides) is both the protagonist and, in open homage to Thornton Wilder’s “Our Town,” the narrator. Like a good Stage Manager, Eddie sets the scene and fills in the missing pieces. This includes pointing out those people who, for the sake of economy, he says, are not personified by an onstage actor. Socarides excels in both roles.

His nostalgic tale begins when the teenage Eddie (the appealing Socarides) is caught in school passing a dirty drawing involving Glinda the Good and Injun Joe;